ONWARDS TO PANAMA CITY – Across the Caribbean from Bonaire

Their son Tim, his wife, Gisela , and two small children  Chloe  4, and Finley 2 bought a Discovery 55 and sailed it from Gran Canaria to St Maartin, they originally set off on the 9th March arriving in Antigua 18 days later.

They are now heading for Panama City, their blog from Salty Finch follows: 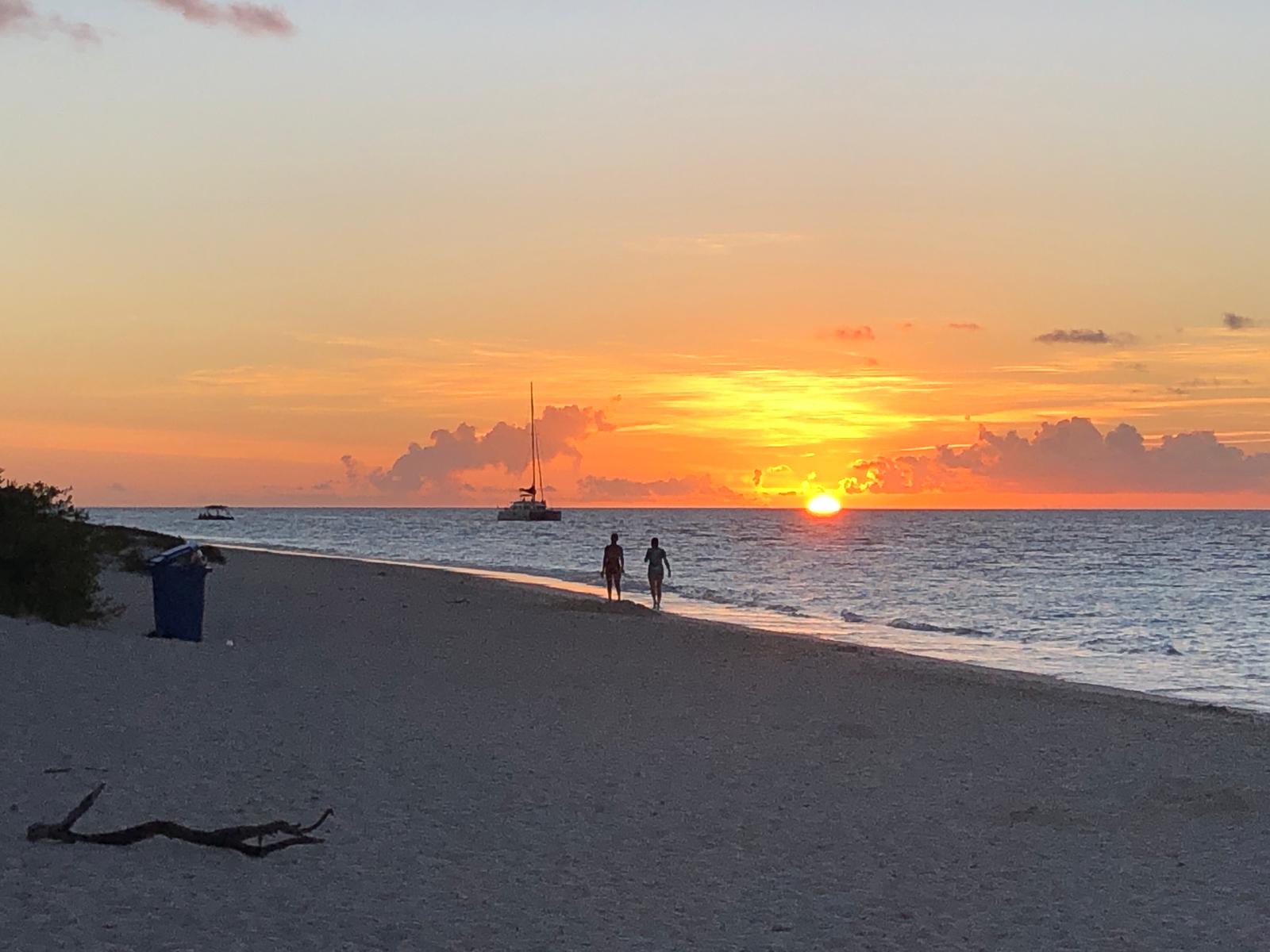 Just a quick update on the trip so far…

We left Bonaire Wednesday at 11:00, a little bit later than planned as a few of the crew were a bit hungover. We won’t mention any names, but let’s just say the last braai on Bonaire was a memorable one.

For this trip west, we have the trade winds behind us the whole way again, as well as some current helping us along. We should manage to get there in 5 days. The only unfortunate thing is that per the forecast the wind will die down for the last two days so we might have to motor.

At the moment we are making excellent progress. With our keen student Nico, we poled out the headsails this morning and are sitting comfortably at 8 knots with 18 knots of wind and about 2 knots of current.

It has made such a change having Inga and Nico with us. Everyone has a bit more free time and can get more sleep, the kids have Nico to entertain them 🤪 and most of all we enjoy the company! Unfortunately Inga is not on top form, she started with a cold and on top of that is feeling a bit seasick at times. Tim and I are also feeling some cold symptoms, but not too badly yet. We think it is the three weeks of over indulging that is now catching up with us. So a bit of a detox while at sea will be good for us all.

We have been very keen to catch a fish and are trawling with two lines. Our first “catch” of the trip was a Brown Booby. Now for those that aren’t familiar with the wildlife here, that is a bird. The silly thing grabbed our lure and we cut it free after dragging it through the water for a minute. We think it survived 🙏

Chloe and Finley have been catching up on sleep today, they were both in bed before noon and slept for three hours. They are very excited about the animals they might see when we get there – red frogs, howler monkeys, crocodiles and sloths 🦥. Finley thinks we are out for a day sail and keeps asking if we are almost in Panama? And will he get a new bike once we are there? The poor boy was not happy to give up his first set of wheels.

Sending lots of love to you all, will send another update once we catch a real fish! 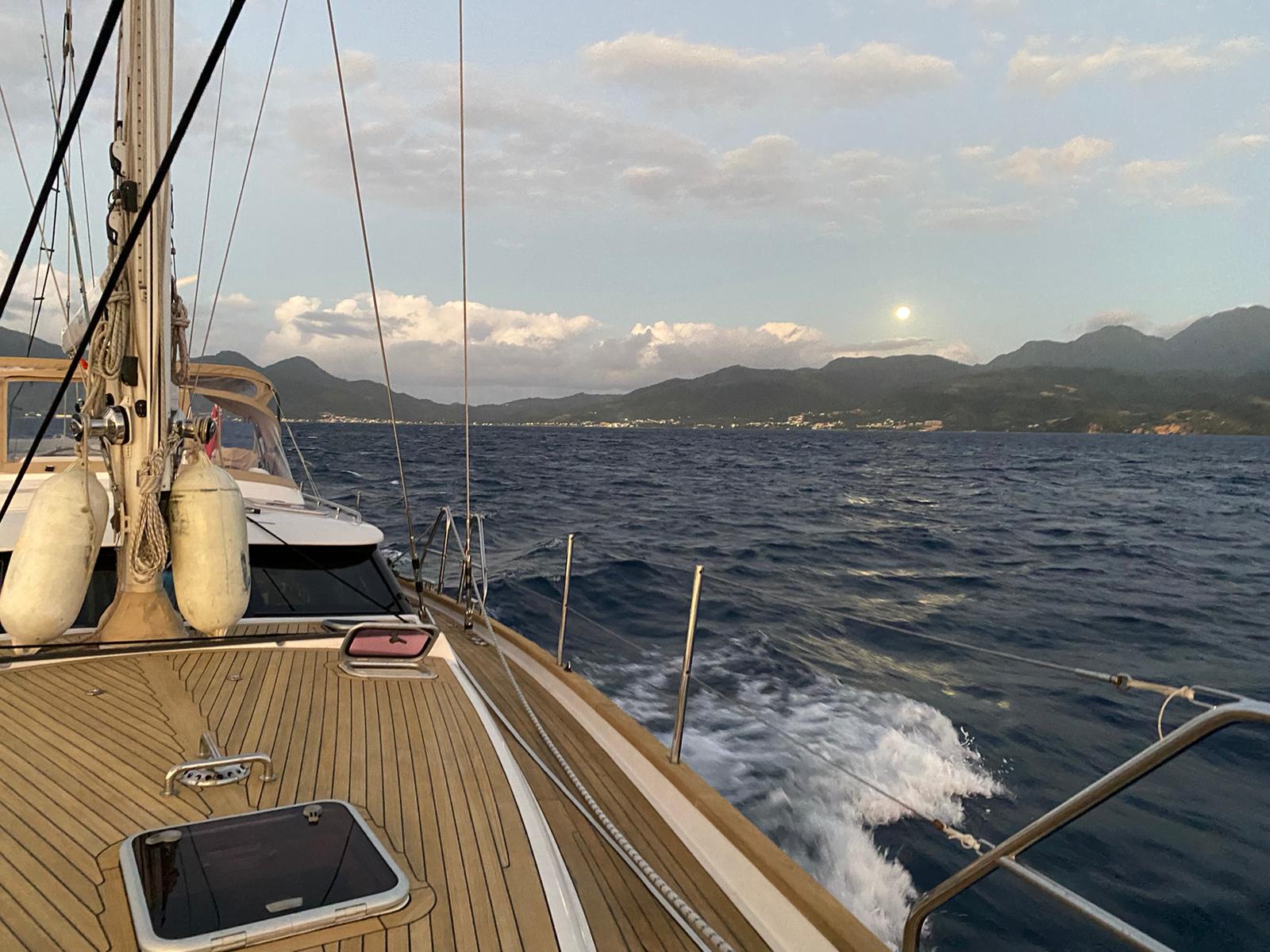 We are currently 84 nm from Bocas and looking to arrive around midday local time on Tuesday. We have been making slow progress (4.8kts) the last two days due to a very strong current against us, hence the added day to our journey. The wind has almost completely died down so we have been motoring for two days, apart from an odd squall where we had a great sail and a free rinse. Spirits are high again, but a few days ago they were below average…

On Friday we received a weather update and it alerted us to an increase of winds and swell the following day. The options were to stay on course or sail south to a more protected area. As we were running with the wind and already had 2m swell behind us, turning south would have been very uncomfortable with the swell beam on for hours. We decided to keep going, brought some sail in and waited. We had both headsails poled out at this point and the boat was sailing beautifully, doing 10 kts surfing down the waves. We also had the current with us.

With less sail out we slowed down a bit and the boat was super steady. I handed my watch over to Nico at midnight and the wind had not picked up. During his watched it started to increase and the seas as well. All was well up to 30 kts, but then the wind over powered the sails and the autopilot lost control. The boat rounded up into the wind and both sails backed, poles and all. Tim immediately came to help as we had all been woken by the sudden, severe change in motion and the loud bang of the poles and sails flinging around. It was a wonder no one fell out of bed.
They managed to bring the sails in and by some miracle nothing was broken.

We then motored through the night in a force 7 with huge 4m swells behind us. It was hellishly uncomfortable down below and pretty scary for the newcomers to see such big waves. I would have been frightened too, but after our first day of the Atlantic crossing, this didn’t feel nearly as bad. The worst was trying to sleep with the rolling which was basically impossible. The boat was in a real state, latches had broken off drawers and there was literally stuff everywhere. Plants fallen over, waves wetting the cockpit and even inside. What a mess! The bad weather continued for about 15 hours, the wind died down earlier but the swell stayed big for hours.

At this point I have to mention the children. Apart from perhaps not sleeping as well as normal, they did not have a care in the world. They kept on playing and being cheerful throughout, which was an improvement from the last rough weather we had. They well and truly have their sea legs now. Poor Inga was not so fortunate as she was already feeling ill before the rough weather. Now there was even less chance of her keeping liquid down and we were starting to get worried about dehydration as it was now three days of barely any water. Tim got in contact with the off shore support doctor and they immediately let us know what to give her from the medical kits. So we started with Operation Rehydration: within 15 minutes of taking two tablets, she could take sips of rehydration fluid and within 8 hours had drunk 4 litres of fluid. She was sitting up and even ate a grapefruit. What a relief for everyone, most of all her as she was feeling very low. Now she is just about back to her normal self again 💪

Still no fish, although we have hooked two really nice mahi mahi. They gave us a show with their leaps in the air to try to free the hook and managed to get away both times.
We have had a surprising amount of birds coming to roost for the night. One big bird of prey (juvenile eagle or falcon) slept in the tender for a night and now we have swallows arriving every evening. Some have not made it through the night – we had one in the cockpit and the kids tried to feed it, after a while they checked on it and Chloe said he was sleeping on his back 😬 They are very tame and will sit on your hand and one even landed on Chloe’s head!

We will let you know of our arrival, we are all looking forward to some beers that’s for sure! 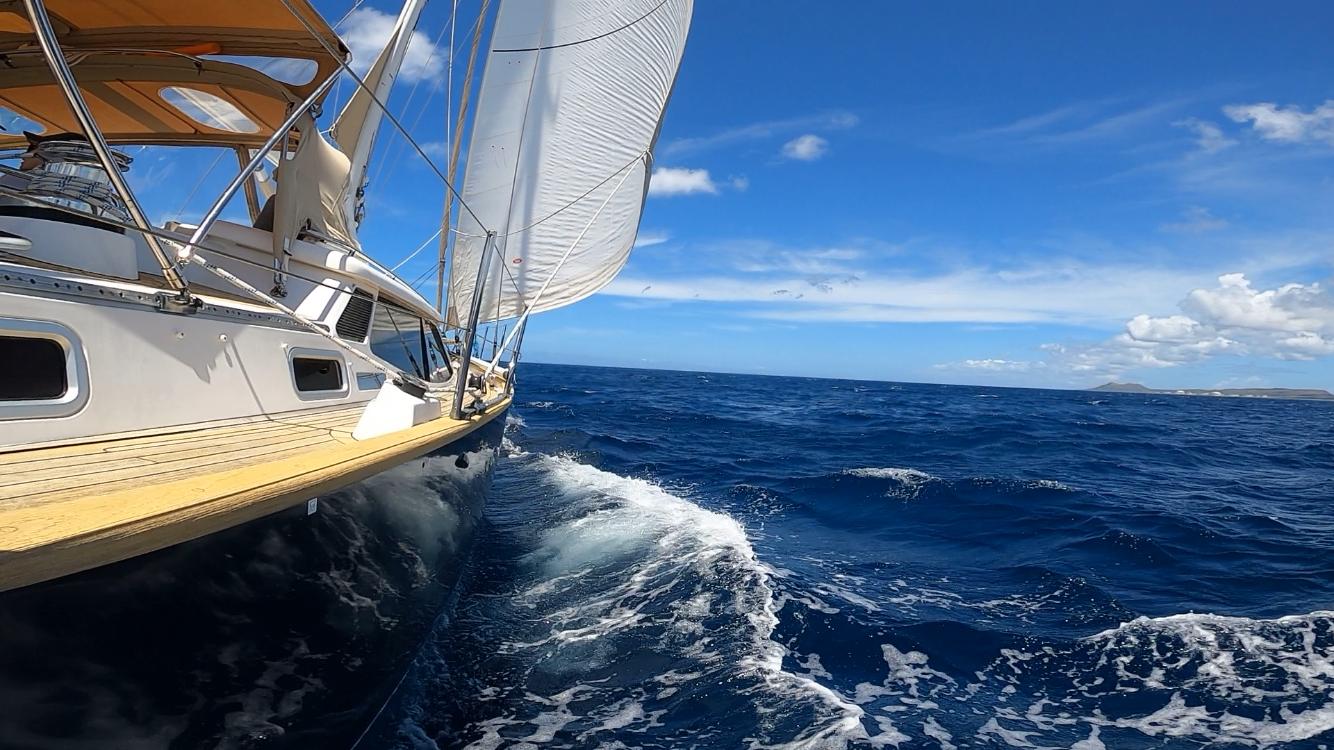 Visit to a Chocolate Farm 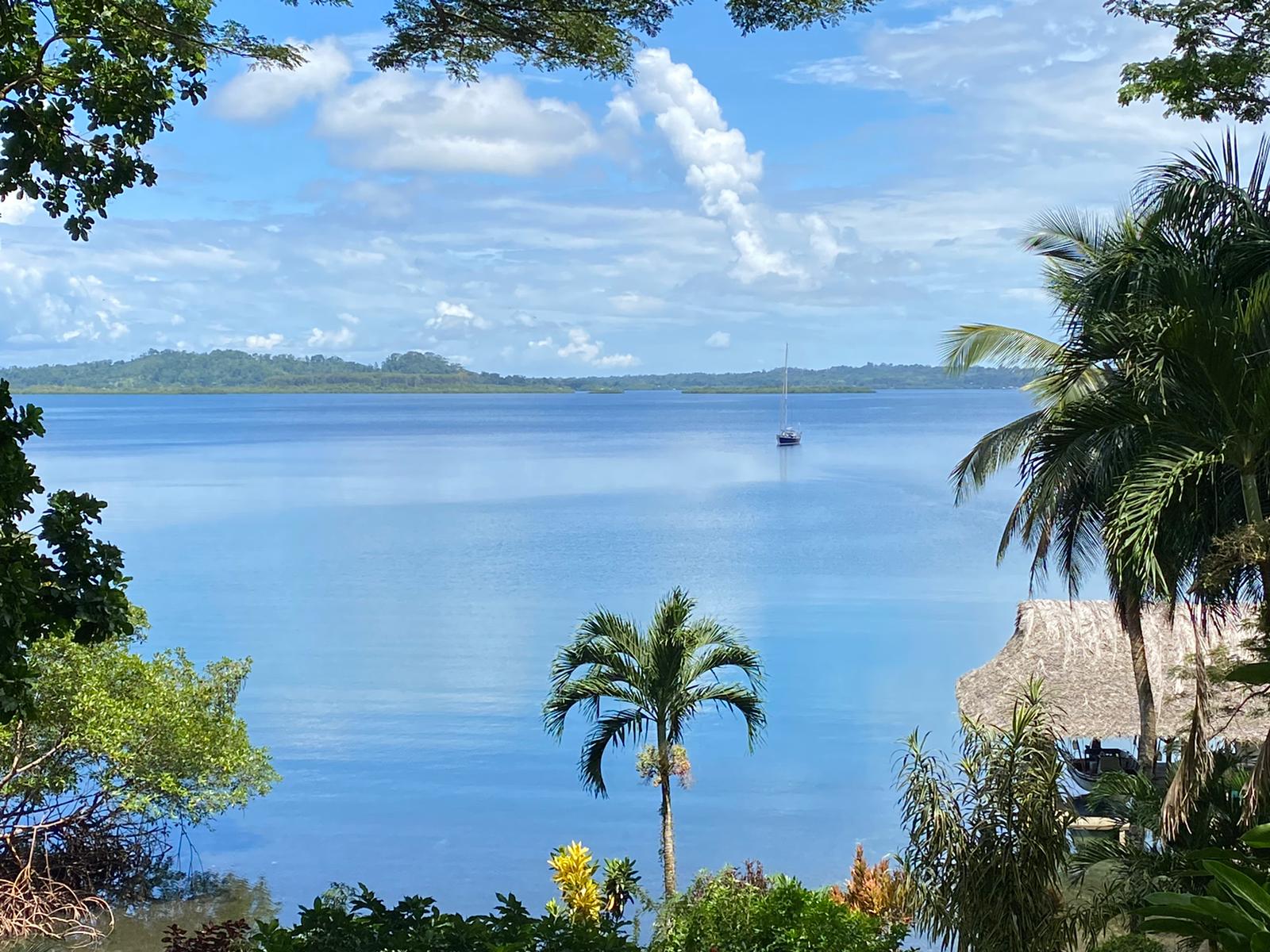 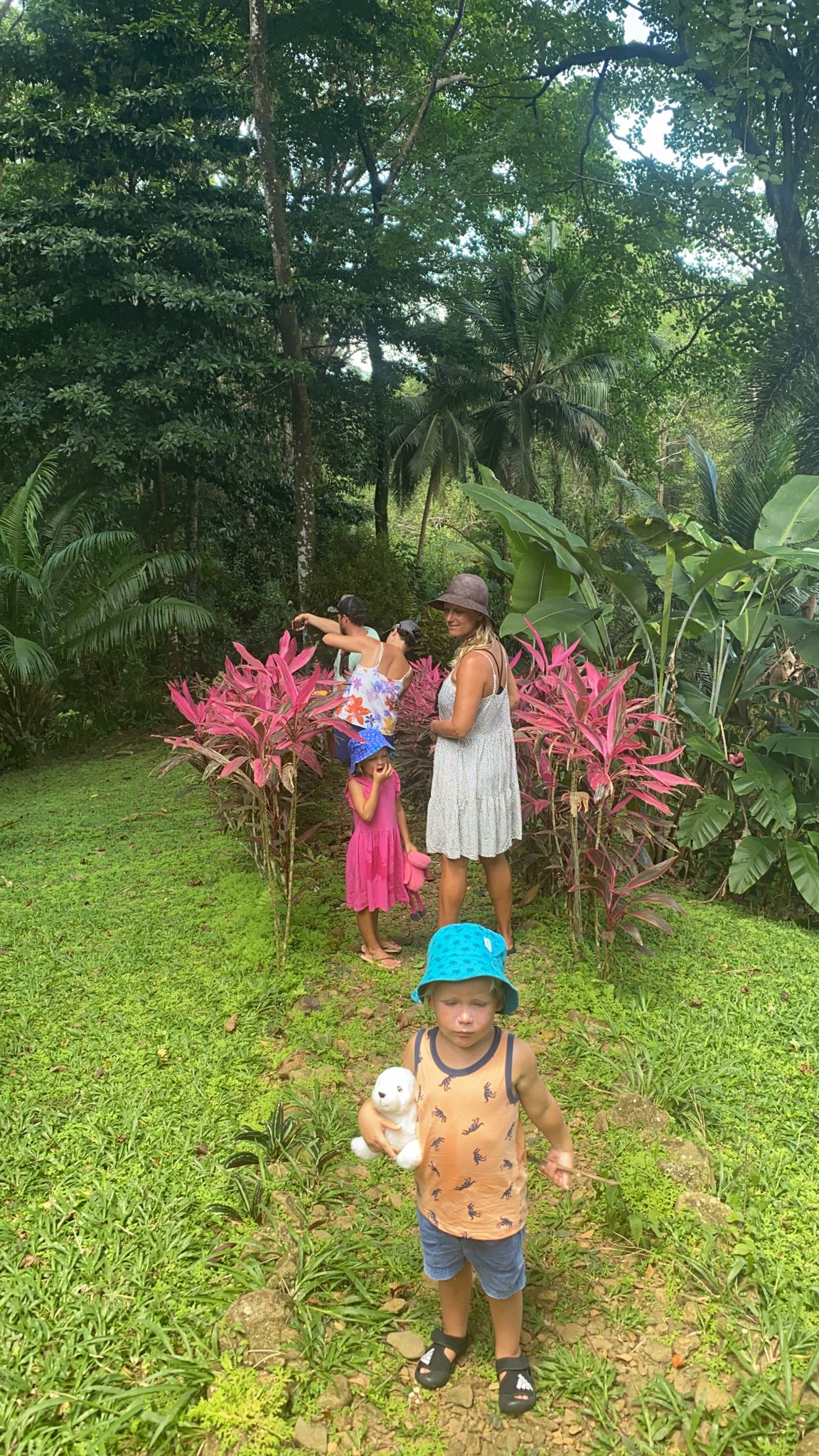 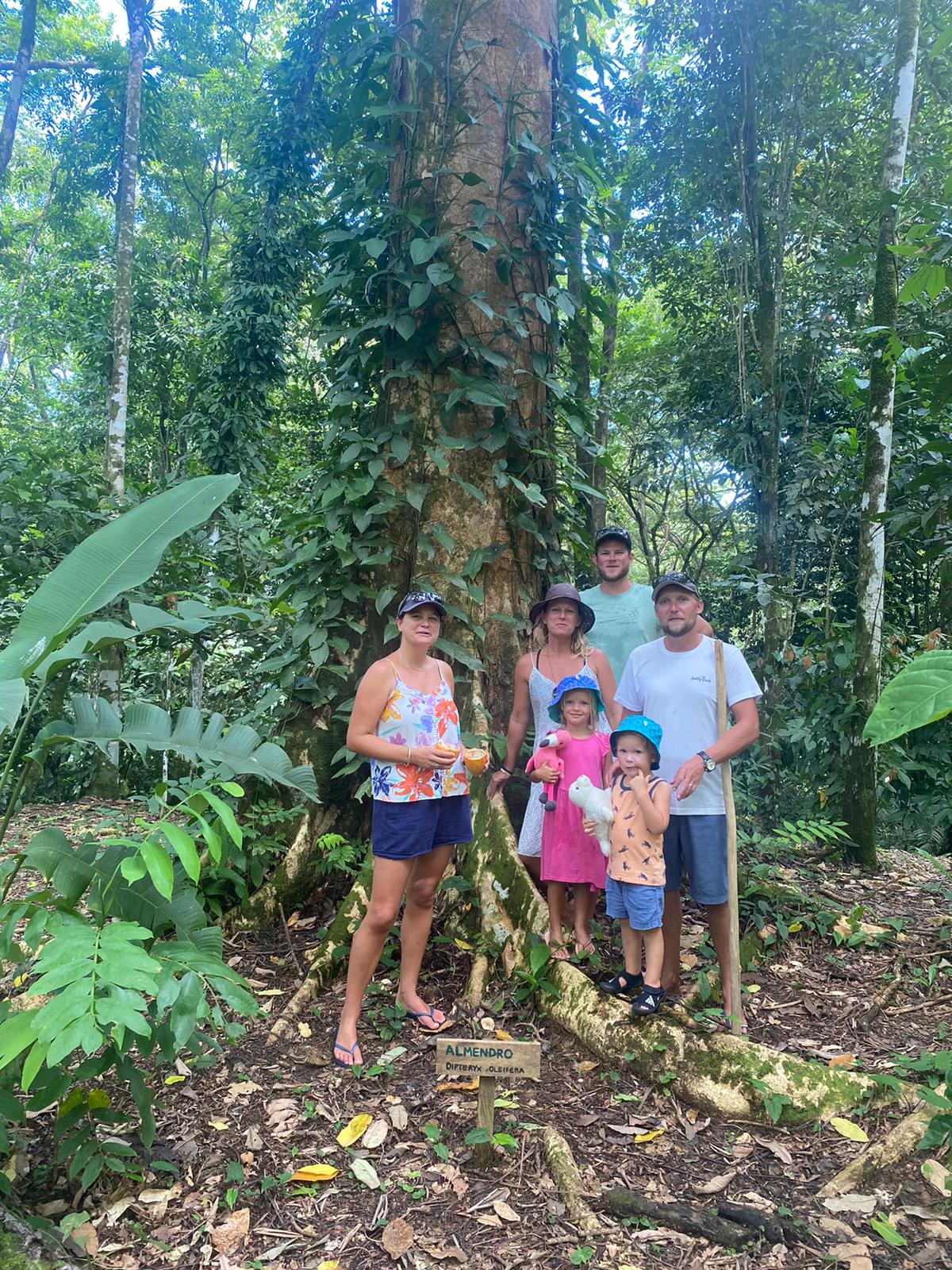 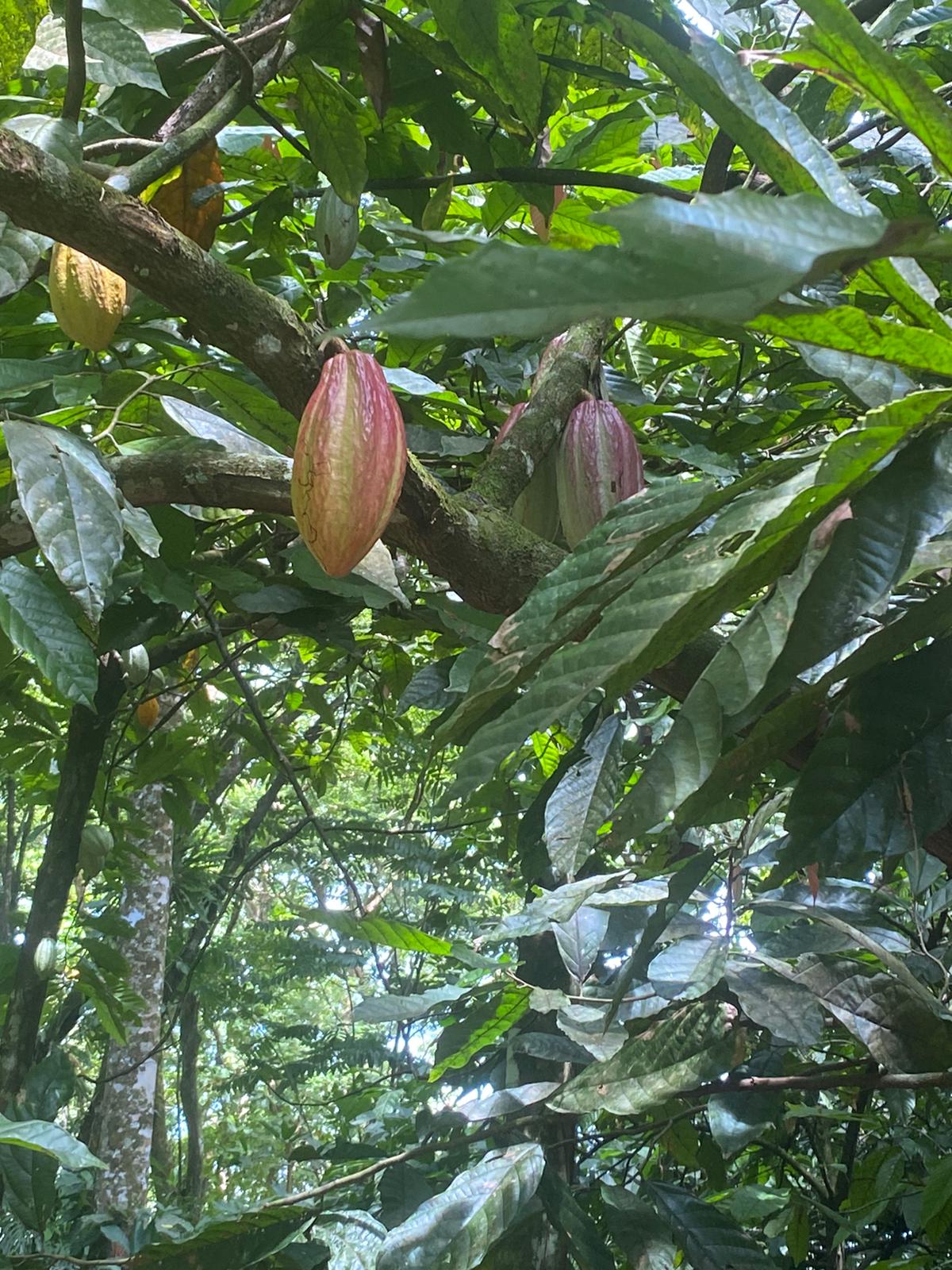 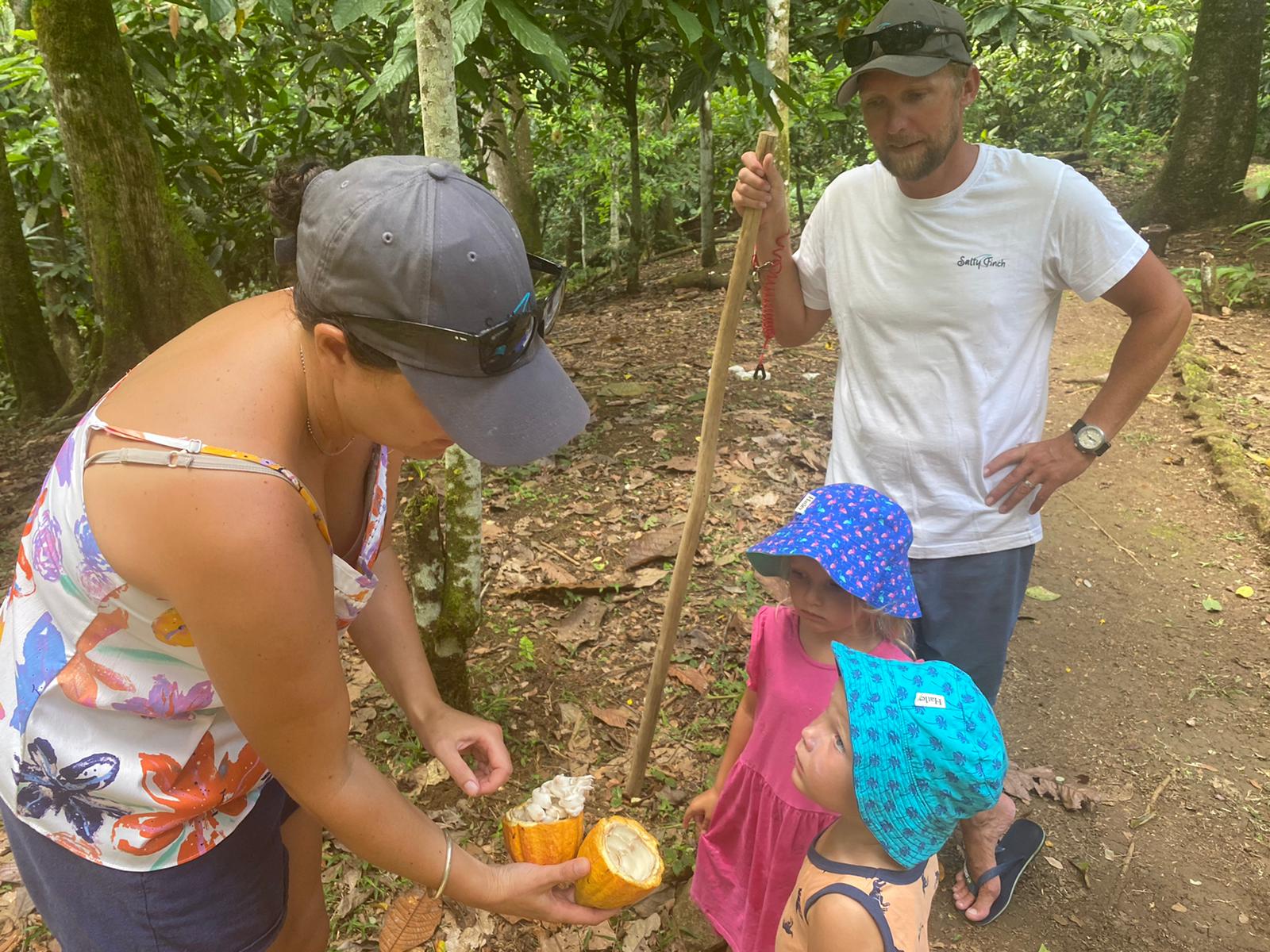 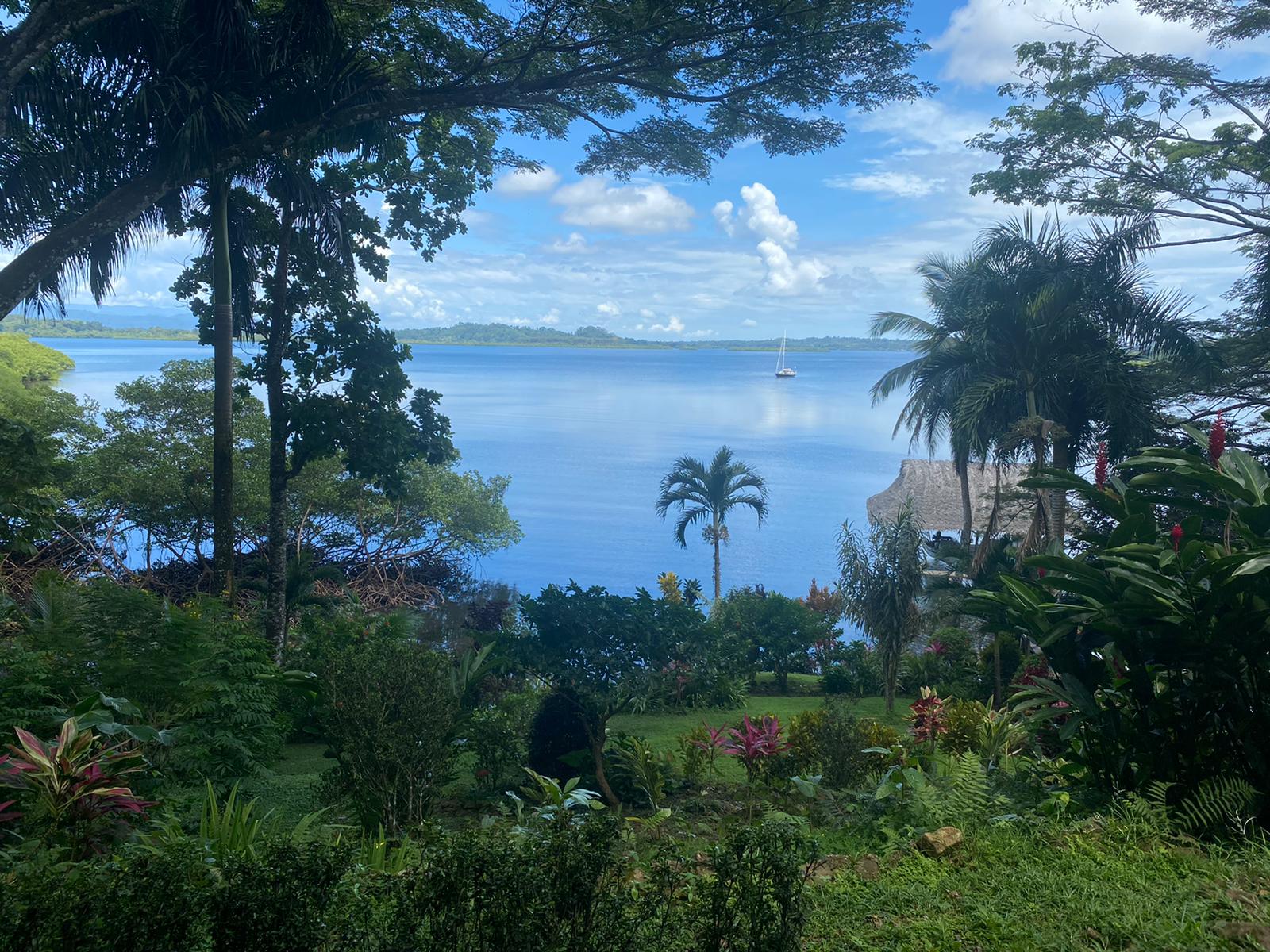 The Cruising ‘WhatsApp’ Group is suspended